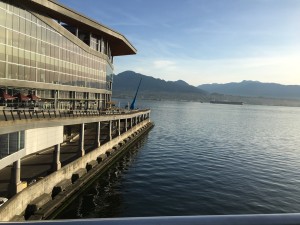 Here’s a few highlights of the meeting:

Remyelination (recoating the nerves with myelin) was a focus of  a great 4 hour afternoon session.  Approximately 5% of the cells in the brain are immature cells called OPCs (oligodendrocyte precursor cells) that potentially could make myelin.  These cells may be important for learning and not just remyelination.  Why does remyelination fail in MS?  May be due to factors that block remyelination,  damage to the nerve (axon section) itself, and the timing of repair.

To test compounds for myelin repair,  remyelination can actually be visualized in translucent Zebra fish.  Micropillars of immature myelin-making cells is another interesting approach to screen for effective compounds to increase new myelin production.  The technique involves upside down cones coated with OPCs.  Clemastine and benzatropine compounds worked in this model.  To see if remyelination works in humans, imaging techniques being examined include PET with MRI scans, myelin water imaging and magnetic transference ratio analyses.

More data was presented on high efficacy treatments.  In the OPERA trials of ocrelizumab (Orevus), 48% of patients had no evidence of disease activity (called NEDA) over 2 years in comparison to 25-29% of Rebif patients.  NEDA means no relapses, no change in disability and no new MRI activity.  Alemtuzumab (Lemtrada) was shown to very effective over 5 years in highly active MS patients whether previously treated with MS treatments or new to MS treatment.